A Brief History Of Door Knockers

The earliest of the knockers originate from ancient Greece which was used for the slaves when they were attached to the door plates to greet anyone who knocks at the door. 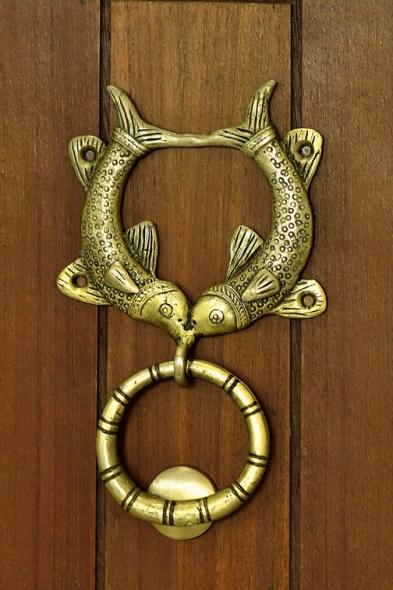 Similar was the use of door knockers by the Romans, but unlike the slaves tied to the metal chains in Greece, in Russia, they were used at the heavy doors to announce the presence of any visitor.

The use of door knockers in homes was started in England during the 16th century which was initially quite planked but was gradually embedded with small designs depending upon the local patterns and traditions.

When it comes to India, they have a unique history starting from bronze door knockers that were discovered from Sindh in Pakistan.

They have been mentioned in the Islamic archaeological history of the Umayyad and Abbassid periods. Most of the door knockers were made in metals such as copper and brass.

The first knockers were developed in the 11 the century which was later on adopted by many western countries.

The 11th-century door knocker has a beautifully crafted with heavy cast designs. It consists of a large ring with a back plate embossed with a lion’s head holding the ring in its mouth.

The lion’s head has been cast with detailed features with the main flowing out in tiers of curls.

All the door knockers from the initial stage have transformed into a wide variety and have engaged a lot of audiences to lure them to buy these door knockers.

Nowadays, doorways have become a sign of any home as they act as a sign of the boundary for separating the interiors and the exteriors. The entrance of any house gives a mindful impact when beautiful door knockers are fixed to the door.

Door knockers come in various styles such as the classic style which include the ancient art of Roman as well as Islamic culture. These traditional patterns look lovely when fixed to the door as they mark the presence of a history of the world.

Nowadays door knockers leave a long-lasting impact on the entrance of your home. They can turn out to be the most significant decision amongst your home décor.

Apart from evaluating and understanding the history of these knockers, another most critical task is to analyze the best-suited material for your home out of a huge variety of door knockers available. Below are a few all-time famous door knockers that have been used extensively since the lost time:

Black iron door knockers have their roots from the time door knockers existed. They give a durable yet beautiful appearance when placed on the door.

The door knockers made from brass lived in the years of 1714 to 1830. The antique brass cuts out an edge above many other knockers because of multiple properties of lustre, durability and strength. It is one of the classy metals which look elegant because of their excellent finish. Out of the various materials of which door knockers are made, brass is the most friendly material that can be moulded into multiple shapes and created into multiple designs.

Nickel is a relatively recent material used in making door knockers. It gives more or less a contemporary door furniture look. It provides a mundane shine that is best for those who do not want any extra detailing work on their door knockers and prefer elegant yet straightforward styles.

From the ancient history door knockers have revealed a beautiful past with mesmerising designs and artworks. Nowadays buyers are more concerned with the design and finish of the door knockers before buying.

They always long for handsomely styled knockers with perfect fittings which suit well with the era. Most commonly purchased are those made with materials like brass, cast iron, steel and bronze as they are found in general styles and are suitable with all weather conditions.